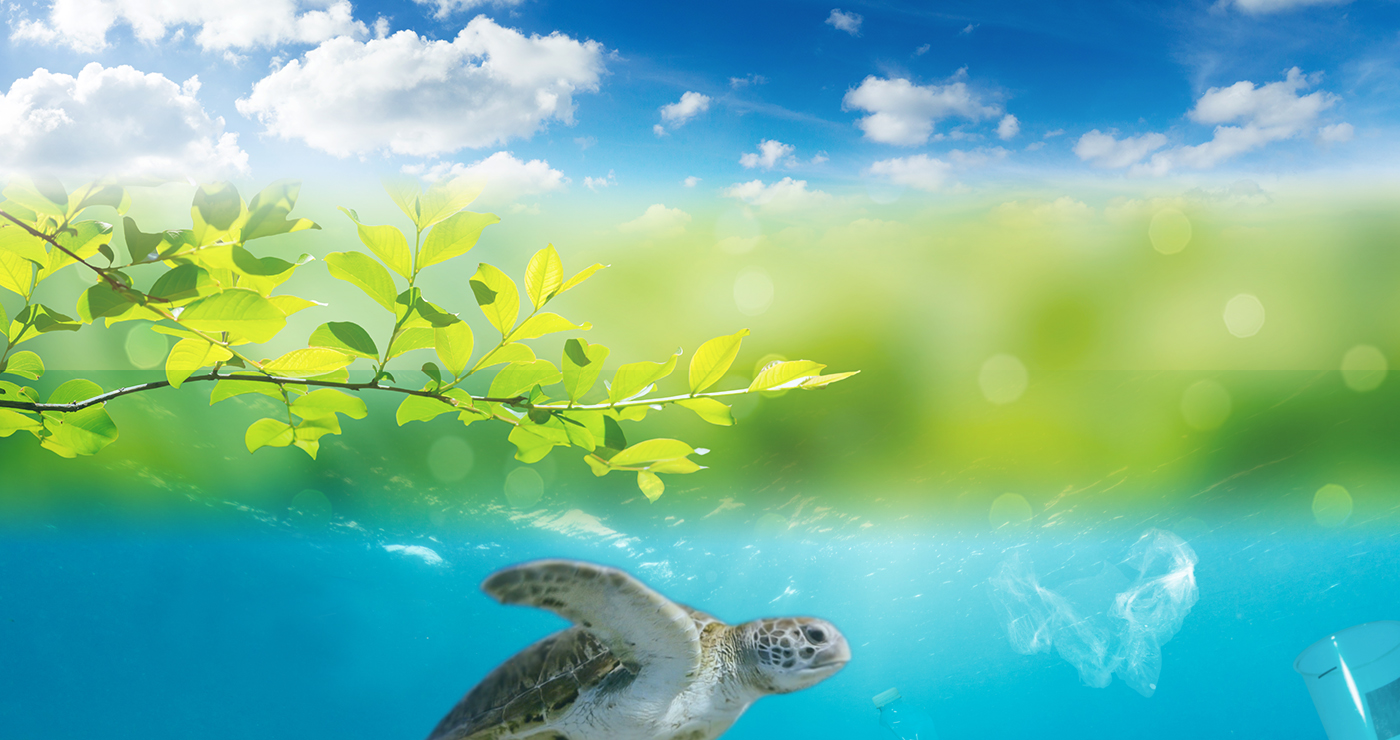 The formation of a society that relies on petroleum resources for convenience is accompanied by the destruction of nature and the environment, and nowadays there are concerns not only about global warming but also about the destruction of ecosystems due to waste plastics that have flowed into the ocean. Microplastics (MP), which are microscopic particles floating in the sea, adsorb harmful chemical substances such as dioxins and polychlorinated biphenyls (PCBs), which may adversely affect not only fish and animals but also humans due to the food chain. However, it is currently difficult to eliminate a plastic-free society from modern society. In order to solve this problem, it is necessary to have basic technology for resource recycling toward a low-carbon society in which the most endowed wood resources are used as alternative resources for oil. Wood resources and materials such as cellulose obtained from them are required. It can be said that the urgent research subject is the technological development that takes into consideration from production to consumption as a substitute for plastic. With the new knowledge gained in the process and our experience and knowledge, this center will move toward the establishment of new science.

We are creating materials that show high biological affinity for living tissues, and are conducting research to apply them to the repair of hard tissues such as bones and teeth and the treatment of deep cancer. Furthermore, taking inspiration from these synthetic processes, we are proceeding with attempts to synthesize ceramics, organic-inorganic hybrids, and nano / microparticles using aqueous solution processes with low environmental impact and biomimetic processes learned from living organisms.

Under the research field of “environmental adaptation function”, we are conducting research on “construction of biotechnology utilizing microbial function”. The concept of research is to (1) elucidate, (2) modify, and (3) engineeringly apply the functions and characteristics (enzymes and gene resources) of microorganisms with special abilities that exist in the natural world. It is to pursue from the three viewpoints of, and to build useful and useful innovative research technology in the fields of environment ， energy or medical and food.

So far, in order to isolate sludge-dissolving bacteria that promote volume reduction of sewage sludge, identify sludge-dissolving factors released by the strains, promote sludge volume reduction in low-temperature environments, and promote methane fermentation of sewage sludge. We have verified the effect of antibiotic administration and the effect of removing extracellular high molecular weight substances. In addition, in order to utilize the nitrogen source contained in sewage sludge in the fermentation field, the nitrogen source that is abundant in sewage sludge contributes to the advanced production of hydrogen gas and lactic acid production using sewage sludge. I made it clear that I was doing it.

We have been working on hydrogen production from Escherichia coli by making full use of genetic engineering technology. As a main result, we succeeded in producing an Escherichia coli strain in which the production capacity of hydrogen gas from formic acid was improved by up to 141 times compared to the parent strain. We also succeeded in producing an Escherichia coli strain that was designed to produce a large amount of formic acid from glucose and finally had a hydrogen-producing ability five times that of the parent strain. In addition, we have found that more than 20 types of genes (whose involvement in hydrogen production has not been reported so far) are involved in hydrogen production, and some of them are pseudogenes that are considered to be non-functional genes. Was revealed to be included

We are conducting research on the elucidation of the bacteriolytic function of “Bdellovibrio genus bacteria” that have bacteriolytic properties. So far, we have discovered a phenomenon in which the predatory activity of Escherichia coli by Bdellovibrio bacteria is inhibited under weakly acidic conditions, and are elucidating the cause. In addition, using this Bdellovibrio bacterium, we are also conducting applied research in the environmental and hygiene fields, such as reducing the volume of sewage sludge and inactivating fecal pollutants.

This research is mainly a joint research with Kyushu Dental University, and isolates and identifies “a strain having a function of suppressing periodontal pathogenic bacteria” from a group of bacteria in an oral sample such as mouthwash. Then, we are proceeding with research to elucidate the mechanism of periodontal disease suppression. This research is also a research theme that has been started in recent years, and although there are no published papers so far, it is a research content that contributes to healthy longevity and leads to support for human health QOL.

During doctoral research, he conducted a study called “biodegradation of trinitrotoluene explosives” to isolate explosive-degrading bacteria and elucidate the biodegradation pathway of explosives, compare the degradability of analog compounds, and detect and identify difficult-to-identify substances by a new method. And so on. He also searched for promoters that would be activated only in the presence of trinitrotoluene for the development of bioassays for explosive detection. Currently, we are conducting research on microbial degradation of pharmaceuticals.

Aiming to develop new materials that can be used in the medical and healthcare fields, we are conducting research focusing on three main issues.

①Structure around silicon and cell responsiveness

Silicon is an essential element in living organisms, and it has been reported that silicate ions contribute to the growth and regeneration of our body. Basics using chitosan-siloxane complex to clarify the relationship between chemical species with different peri-silicon structures and the responsiveness of various cells (osteoblasts, neurons, fibroblasts, etc.) Research is being conducted.

We are working on the development of materials that can help the regeneration of nerves, bones, ligaments, etc. when they are lost. We are investigating the possibility of tissue regeneration by organic-inorganic composites with shapes such as membranes, gels, and fibers produced using the sol-gel method.

For example, the technology of converting sunlight into electricity has already become a large market and is well known, but the efficiency of converting light into electricity varies greatly depending on the substance. Elucidating the reason for this and searching for substances with higher energy conversion efficiency has become a very interesting problem for researchers.

In order to correctly understand the mechanism of expression of functionality exhibited by a substance, it is essential to know the behavior of the atoms and electrons that make up it. Quantum beams such as X-rays and neutrons are very useful for investigating them and help us understand the laws of physics in the microscopic world. This understanding also makes it possible to develop further new functional substances. Furthermore, if we make good use of the latest science and technology, we can theoretically predict new substances. The key technology is computational science using supercomputers. Using this computational science, we are conducting research to elucidate the states of electrons and atoms in matter and investigate in detail whether it is garbage or can be a rough diamond.

Since the functions of semiconductors are expressed by electrons and holes in the semiconductor, it is important to know their behavior. However, it is not easy to capture the behavior of electrons and holes in fine particles as they are. Photoacoustic spectroscopy (PAS) is an effective spectroscopy method for such material evaluation, and our research group has developed a system that is an extension of conventional PAS, and photocatalysts “on the spot” where reactions are occurring. We have been developing a system that can evaluate materials. The goal of this center is to contribute to a resource recycling society by applying the system we have developed to biomass-derived materials and feeding back the obtained information to material development.

Charcoal derived from biomass (biocharcoal) is a relatively familiar material that has been used by humankind since ancient times. Traditionally, biochar has been used primarily as a solid fuel around the world. However, the use of biochar as a solid fuel has decreased significantly, and it is not expected that the amount used will increase significantly in the future. In recent years, from the viewpoint of active utilization of biomass, which is a renewable resource, research in various fields related to new utilization methods of biochar has become active. For example, research aimed at creating highly functional porous carbon materials by controlling the pore size distribution and constituent elements using biomass or biochar as a raw material, and research aimed at engineering applications such as the production of gasified fuels are active. It has been done. In addition, at the 49th Intergovernmental Panel on Climate Change (IPCC) General Assembly in May 2019, a method for calculating the amount of carbon fixation associated with the introduction of biochar into farmland and grassland soil was added, and soil storage of biochar was added. It has been internationally recognized for its contribution to reducing CO2 emissions. Research related to biochar in the future needs to be carried out in collaboration with researchers in various fields.

Global plastic production has grown exponentially to 396 million tonnes per year in 2016. It has been reported that plastics discarded in the environment flow to the sea without being naturally decomposed, and microplastics with a size of 5 mm or less due to the influence of ultraviolet rays and the like cause scientific and physical damage to the ecosystem. Therefore, urgent technological development is required. As a means to solve the microplastic problem, we focused on the microbial fuel cell system that generates electricity from the electrons obtained from the microbial decomposition / conversion reaction, and microbiologically and electrochemically decompose (small molecule) using microplastic as a resource. We are developing resource recovery technology that can realize (chemical) and electric production.